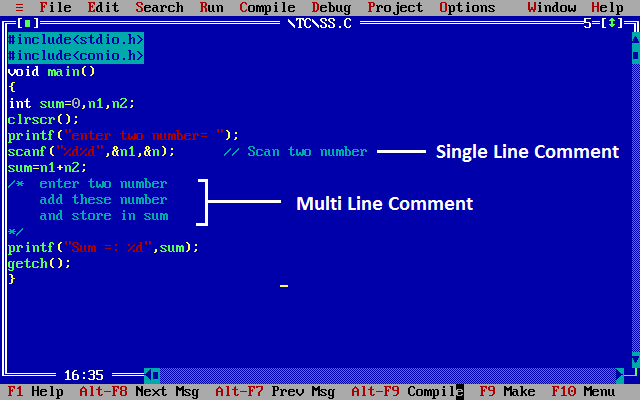 Comments in C language are use to provide information about the lines of coding stuff. It is widely used for the code documentation. In the C language, there are 2 types of comments

Even you can put your comment after the statement as well.

It can occupy multiple lines of code, but cannot be nested.

/* multi line code to be commented */

Let’s look at an example of a multi-line comment in C.

1. Program may include any number of comments at any place.

2. Nested Comments are not possible, it means that there is no possibility for comments within comments.

3. Comments can be splits over more than one line.

4. Comments are not case sensitive.

You can also create a comment that displays at the end of a line of code. But generally its a better practice to put code before the line of code.

Example: This example goes same for C/C++ as the commenting style remains same for both the language.

int student_id; // id of the student

When & Why is it necessary to use Comments in programming?